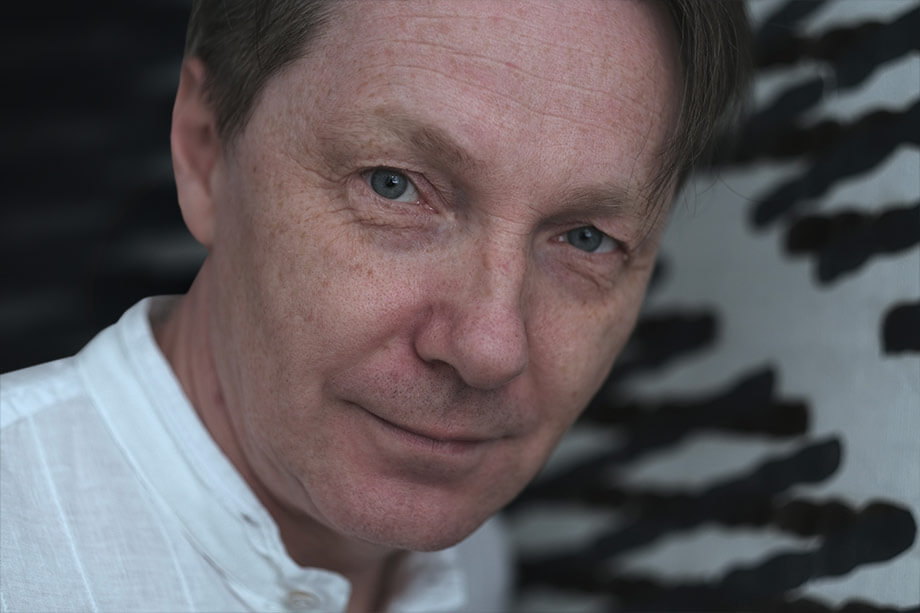 In 2019, he was awarded the title of professor of fine arts.
He is a graduate of the Faculty of Painting at the Academy of Fine Arts in Warsaw. He obtained a diploma with honors in the studio of prof. Stefan Gierowski. At this university he runs the studio of Easel Painting Technologies and Techniques. There, he shares his workshop proficiency with students from all over the world.

He also lectures at the Institute of Artistic Education at the Academy of Special Education Maria Grzegorzewska in Warsaw. For several years he was also associated with the Institute of Fine Arts at the Świętokrzyska Academy in Kielce.
He participated in many Polish and international exhibitions. Associated with the Discursive Geometry trend, created by artists from around the world.

Grzegorz Mroczkowski was born in 1966 in Włocławek. He lives and works in Warsaw.

Grzegorz Mroczkowski responds to two age-old and universal human needs: the need for order and the need for beauty.

The order present in his paintings originates from mathematical analysis, the laws of geometry, fastidious observation of composition, the deliberate use of painters’ fundamental building blocks: lines, points, color and matter.

The order present in his paintings comes from his musical perception of the world, his capacity to perceive harmony and composition in places where an untrained eye would merely see a chance landscape. All of his paintings feature a premeditated and tight composition, like a fugue, in multiple voices that blend, resound together and fade away at the right moments.

The beauty in Mroczkowski’s paintings ensues from the vibration of pure color. Just as a single sound is an atom used to compose a symphony, a single symbol, patch or mark of a brushstroke perfected over many years is an elementary particle in Mroczkowski’s paintings. The trace left by his brush, repeated tens of thousands of times, is his means of expression and his signature alike.

Mroczkowski blends rigorous mathematical analysis of space and sound with the subtle movement of his brush in a method unlike any other.

In times when ostensibly anyone can become an artist, now that all the rules in painting have been broken and everything that is tabu has been violated, Mroczkowski is a master in the traditional sense of the word: he combines a thorough education with steady development and historical technique with modern esthetics.

In times when an app installed in a cell phone takes a mere second to convert any photo into a painting employing the style of any given painter, and a digital printer can print a million copies of a painting imitating any painting technique, Mroczkowski has selected a demanding and time-consuming painting technique that has been well-known for hundreds of years, namely egg tempera. He prepares his own canvases; he primes them and stretches them onto their frames; he mixes egg yolks with natural pigments on his own to create exceptional paints. That is how Gothic altars and icons that have survived to the present day were painted.

Every painting consists of multiple layers; they penetrate one another to build color, depth and spectacular optical effects. The process of creation is complicated and time-consuming. It starts with an idea, a sketch, followed by geometric conversion, the search for the right colors, their saturation and temperature, and then by applying more layers of paint, drying them and applying even more. Egg tempera does not achieve the fullness of its sound until the fifth layer is applied. Sometimes, more layers are required. The application of the ninth layer, however, precipitates an impression of cacophony; at that point colors deafen one another.

Mroczkowski employs another technique – painting in watercolors. This demanding technique reveals every mistake, imperfection, an unsteady hand. In this case, paper is just the first of several layers. As watercolor paintings have a glaze, paper lends them a sense of luminosity and immateriality.

Mroczkowski strives to attain a state in which color becomes sound and his painting is devoid of matter. Paint turns into pure color, while color transforms into light.

Grzegorz Mroczkowski is a professor in painting at the Academy of Fine Arts in Warsaw (ASP) where he runs a Studio of Easel Painting Technologies and Techniques.

By blending his mastery of technical skills, his deftness in transposing reality and his enormous sensitivity to the purity and harmony of color Grzegorz Mroczkowski has created contemplative paintings: landscapes taking the form of partitures that replicate the ephemeral vector of sound on a static canvas.